Caption on a portrait of the Davis family, Toodyay

"Charlotte Davis was born in England, the daughter of Thomas and Catherine Davis. They arrived in the Swan River Settlement on the "Parmelia" in 1829. On June 1st 1829 the little girl was carried ashore by a soldier, the 1st of her sex to land. She grew up at Toodyay where her father worked as a blacksmith for James Drummond. In 1845 she married John Herbert. About 1850 he was working as a carter on the Toodyay–Gildford run, with wagons. Later the couple ran the Royal Oak Inn, and reared their family, Esther, John, Martha, and Lottie. Mrs Herbert was biried in the Toodyay Cemetery. Photo donated to the Toodyay Old Goal Museum by her great-grandson Mr. W.G. Chitty of Toodyay." 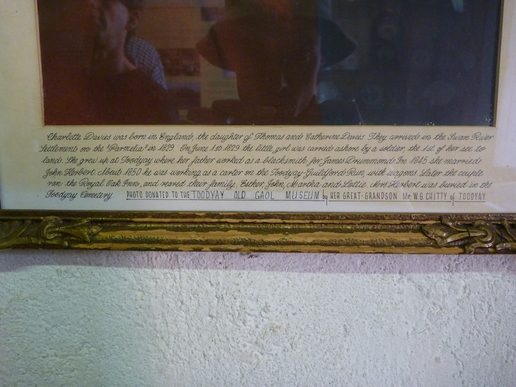