FREE SPECTATOR EVENT // All boats entry by invitation only.

This amazing spectacle is the only sailing event of its kind and this year marks a celebration of 100 years of Fremantle Sailing Club. It is Perth’s best of the best invitational races. A ‘Pursuit Race’ in the confined Fremantle Inner Harbour showcasing exceptional sailing and excitement at every turn.

The event has great historical significance considering that the first yacht was introduced after World War II, back in 1946 – the first year of the traditional Challenge Race. The race was contested by entrants from both Fremantle Sailing Club and East Fremantle Yacht Club (formerly Melville Yacht Club). In December 1947, discussions took place between the two clubs and the Rockingham Progress Association which resulted in the birth of this fantastic event now known as the Fremantle Harbour Classic.

A perpetual trophy made from the binnacle off the SS Sultan, the first steamship into Fremantle Harbour, was introduced and carries the names of the winners since 1991. The Port was the body of water Fremantle Sailing Club (FSC) called home previous to its current location. FSC is adjacent to the world famous Gage Roads where the 1987 America’s Cup was held. The race has both tradition and history.

This dynamic event is free to the public. Spectators can take advantage of the bird’s eye views which are available from many quayside vantage points within the Fremantle Harbour. Come and see some of the greatest competitors this state has to offer. 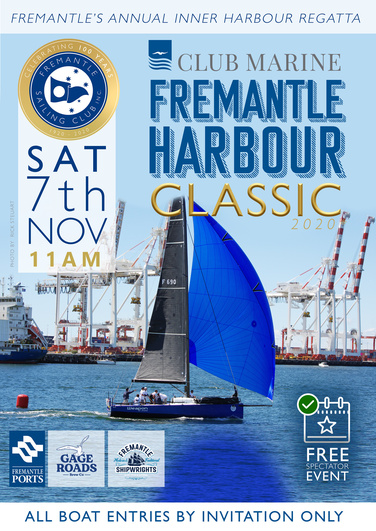